Any self-respecting beer drinker - and especially a London beer drinker - knows that this week is a big one. The premiere event is, of course, the Great British Beer Festival, which kicks off its 36th year. There are, however, a number of smaller though still highly intriguing events taking place over the next seven days, including a few Meet the Brewer nights and the inaugural year of the London Craft Beer Festival. Please read below for further details on what's happening this week.

So there you go. I have to say this is one of the most impressive (and dangerous) beer weeks I have ever encountered. For those of you aiming to tackle the majority of the events listed above, please keep me updated on your progress (tweet me @LondonBeerGuide). I'll be hoping to do something each day this week, though I almost certainly won't be able to do it all - but you never know.


﻿﻿Most people know Pilsner Urquell as the ubiquitous Czech Pilsner you can find all around London and, indeed, all around the world. Given its mass-market status (it is owned by SABMiller), it's actually a pretty decent beer, and if I happen to find myself in a non beer-focused bar I'll happily drink a Pilsner Urquell. What most people don't know, however, is that Pilsner Urquell actually make a different version of their flagship lager that rarely gets exported out of the Czech Republic. This different version, known as Pilsner Urquell Nefiltrovaný, is both unfiltered and unpasteurized (the version we see most often is unpasteurized and filtered). It is widely considered the best example of the Czech Pilsner style; it scores a 3.97 (out of 5.0) on consumer-based beer rating site RateBeer, which puts it in the top percentile for the style and makes it the highest-rated Czech Pilsner. By way of contrast, the standard, filtered version scores a 3.26, which places it in the 95th percentile and 45th highest out of all Czech Pilsners listed on RateBeer.
﻿﻿﻿﻿﻿﻿﻿﻿﻿﻿﻿﻿﻿﻿﻿
﻿As such, it was with much enthusiasm I greeted the news that Pilsner Urquell would tour their unfiltered beer around London. Wednesday was the first day of a four-day circuit around the Big Smoke. Basically, a team from Pilsner Urquell have a barrel of beer for each bar they visit. On Wednesday they started in Mayfair at the Guinea and finished on Marylebone High Street at the Prince Regent, the stop at which I visited them. On Thursday they were in East London (I stopped by the Haggerston for a pint), Friday in Central and North London, and they will finish today in Southwest London. For the full itinerary, see here.


﻿﻿﻿﻿﻿﻿﻿﻿﻿﻿﻿﻿﻿﻿﻿﻿﻿﻿﻿﻿﻿﻿﻿﻿I thought the beer was outstanding - and hence my effort to try it more than once. Interestingly, I actually picked up on some subtle differences in the beer from the two sessions. On the first night the beer had a much stronger bready character, a bit more toasted corn; on the second night it had more crispy straw bitterness and more restrained breadiness. I had one of the first pours out of the cask at the Prince Regent and the beer was flowing a little lively, resulting in one of the firmest heads I have ever seen on a beer. (If you wanted, I'm sure you could have literally rested another glass right on top of it.) Overall, though, the beer was essentially the same, defined mostly by its delicious, bready pale malts and delicate bitterness of hay and straw. The beer also has a fairly miraculous texture - exceedingly fine and creamy. It's just about one of the most drinkable beers I can recall having. After four pints on Wednesday and another one (and a half) on Thursday, I'm pretty confident about that statement.
﻿


As I noted above, today will be your last chance to try this beer for the foreseeable future. I spoke with a Pilsner Urquell rep at the Prince Regent and he said the brewery will likely continue bringing the unfiltered version out for special occasions but that it typically won't get to London more than once per year. So, whether you're a lager-lover or simply a beer enthusiast eager to try something special, I highly recommend you make your way to Southwest London later today to try some of this beer.﻿﻿
Posted by Unknown at 05:01 No comments: 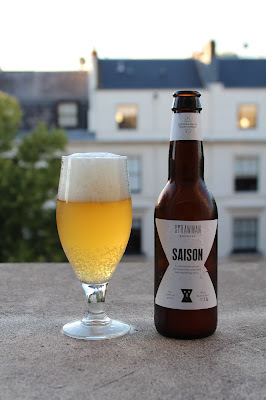 I recently tried my first beer from Strawman, a small brewery based in Hackney, just off the northeast corner of London Fields. This beer was the Strawman Saison. First of all, any brewery that launches with a saison as one of their first beers is pretty damn OK in my book (so long as they do it well, of course). Thankfully, Strawman did an exceptional job on their low ABV interpretation of the saison style. At a mere 3.9% ABV, this beer punches well above its weight class. It pours hazy yellow and strongly effervescent with a large, frothy white head; it looks great - just check out the photo to the right, yeah? The aroma holds dry, pale malts, dry dough, some spicy yeast and hints of banana. Lightly sweet, the flavor brings further dry but somewhat doughy pale malts, touches of orange merengue and mellow bitter straw. It's light bodied with lively, massaging carbonation. The finish is fairly dry with some sweet, dry and mildly doughy pale malts, the faintest hints of tangy lemon and low bitterness. Very clean, very refreshing. Overall it is quite a solid saison. And to do it all while keeping the ABV at 3.9% is indeed impressive. I am excited by this new brewery. (Score: 4.1/5.0)
Posted by Unknown at 12:42 No comments: 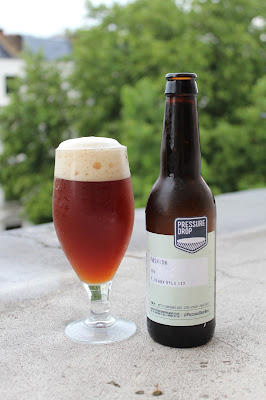 On this rainy Monday evening I tried Pressure Drop's Fashion IPA. The beer pours cloudy, amber-brown with a lasting, frothy off-white head. The aroma holds lots of brown bread, ripe orange, pine and subtle toffee. The flavor is medium sweet with more bready malts, toasted sugars, moderate alcohol boost, some further ripe and slightly dried citrus fruits, touches of toffee and brown sugar. It's medium bodied with fine, massaging carbonation. The finish has light warmth and hints of pine resins, some rindy bitterness, soft earth, more brown bread and a bit of dry toffee. All in all it’s quite tasty stuff, if not especially clean and in the style of paler IPAs. I've had a range of the Pale Fire American pale ales from Pressure Drop, which were all fairly true to style, so it's interesting to try an IPA from them that, I would say, is a bit more adventurous. (Score: 3.5/5.0)
Posted by Unknown at 11:32 No comments: 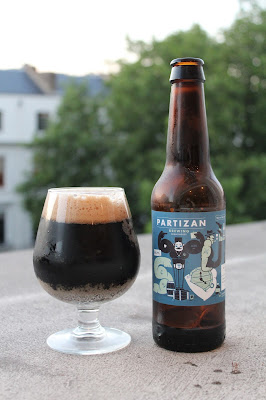 I recently tried Partizan's Barrel Aged FES (Foreign Export Stout). This is the first barrel aged beer Partizan has put out so far. The beer debuted at the Haand Beer Festival in Drammen, Norway in late May before going on sale down in Bermondsey in mid June. The beer pours deep, brown-black with a strong, frothy beige head. Lightly charred, somewhat ashy roasted malts abound in the aroma, with a bit of cocoa and earth as well. The flavor is medium sweet with lots of rich, dark chocolate, sturdy roasted malts, subtle dried dark fruits, ash, chocolate-covered cherries, burnt wood and burnt marshmallows. It's medium to full bodied with fine, creamy carbonation. There is moderate alcohol warmth in the finish, further dark chocolate, mild bittersweet baking cocoa, a bit of torched barrel, mellow earthy bitterness and burnt sugars. It's great stuff overall. The nuances imparted from the barrel are subtle - a successful outcome from barrel aging, in my book. Some barrel aged beers can be completely dominated by the barrel in which they were aged, leaving little character of the base beer behind; that is not the case here. I wouldn't say I like this beer any more or any less than the original beer. This iteration has perhaps a bit more bitter, burnt wood and slightly more muted, rounded sweetness, but the overall character is similar. Bottom line,  it's nicely balanced and quite drinkable, especially for the alcohol level and intensity of flavors. (Score: 4.1/5.0)
Posted by Unknown at 06:51 No comments: