A Visit to the London Drinker Beer & Cider Festival


Another year of the London Drinker Beer Festival came and went last week, marking the festival's 30th anniversary. For anyone who has never been, London Drinker tends to attract an interesting cross section of London's drinking populace. Given the festival's venue - the Camden Centre, just a few minutes away from Kings Cross - it requires little effort to travel there (assuming, of course, you're a Londoner who passes through central London). And so you see every type of drinker imaginable at this festival, from the pensioner types who really seem to enjoy the early sessions on Wednesday and Thursday (which have free entry); to the office types who find it a great option for post-work relaxation; to the beer geeks who know they will find good beer here.

I was fortunate enough to attend the Thursday early session, so the crowds had not gotten too intense. In past years I have attended the evening sessions where you often need to wait in line just to enter the venue and then, once inside, it's difficult to move. I spent the bulk of my time last week working through the London - or "LocAle" - bar, trying out the newest wares from our local breweries. The best beer of the day, by far, was the Redemption Make Me Smile. While the beer itself was outstanding there's actually a nice (if sobering) story behind it. The beer was brewed in memory of Gerrie Stokes, a former CAMRA volunteer who passed away recently. The name of the beer reflects Gerrie's ever-positive disposition.

At only 3.5% ABV, Make Me Smile punched well above its weight class. The hop character of the beer was dynamic and juicy, with lots of tangerine, lemon and payapa. Delicate, sun-kissed pale malts provided structure to the hoppy menagerie, and the beer finished with mild bitter grass and straw, which gave it satisfying quench. It's the kind of beer best drank by the gallon rather than the pint, and it certainly put a smile on my face as I drank it amidst the ethereal sunbeams of an unseasonably bright March afternoon.

There were a handful of other standouts. I quite enjoyed the East London Brewery Wheat Porter, which had a nice, layered chocolate and dark fruit character to it. Although, truth be told, I couldn't detect anything especially 'wheaty' about it. Perhaps there was more toasted bread character than you might find in a normal porter but beyond that, stylistically, it was a normal porter. I also liked the Twickenham/ Kissingate Nooksack, a fairly sweet, strong pale ale (or American pale ale, if you like) marked by ripe lemon, melon and pale, bready malts.

Also worthy of mention is the Hop Stuff Saison. This was an ambitious beer that didn't completely hit the mark for me, though it was still an interesting beer. The lemon thyme, rosemary and sage additions came through in abundance, to an extent that I found them heavy handed and dominant. Saison, as a beer style, can mean different things to different people, but to me one ought to be, above all, subtle and drinkable. I found elements of the Hop Stuff Saison to enjoy but overall it lacked balance. I'll reiterate that I like the ambition and creativity this beer represents; but the execution wasn't completely there.

Once I had had my fill of London beers (it does sometimes happen) I sauntered over to the non-London bar and tried a few more. The Strathaven Craigmill Mild really impressed me with its depth; lots of roast and chocolate notes packed into this 3.5% tipple. The Great Oakley Delapre Dark also provided some diversion with its woody bitterness and aged, leathery fruit character.

All in all it was another successful visit to the London Drinker, and my early afternoon session further reinforced my belief that drinking four pints of beer before 3pm is a terrific idea. Congratulations to North London CAMRA for putting on another solid festival.

I'll leave you with a few more photos that I hope capture the spirit of the London Drinker. 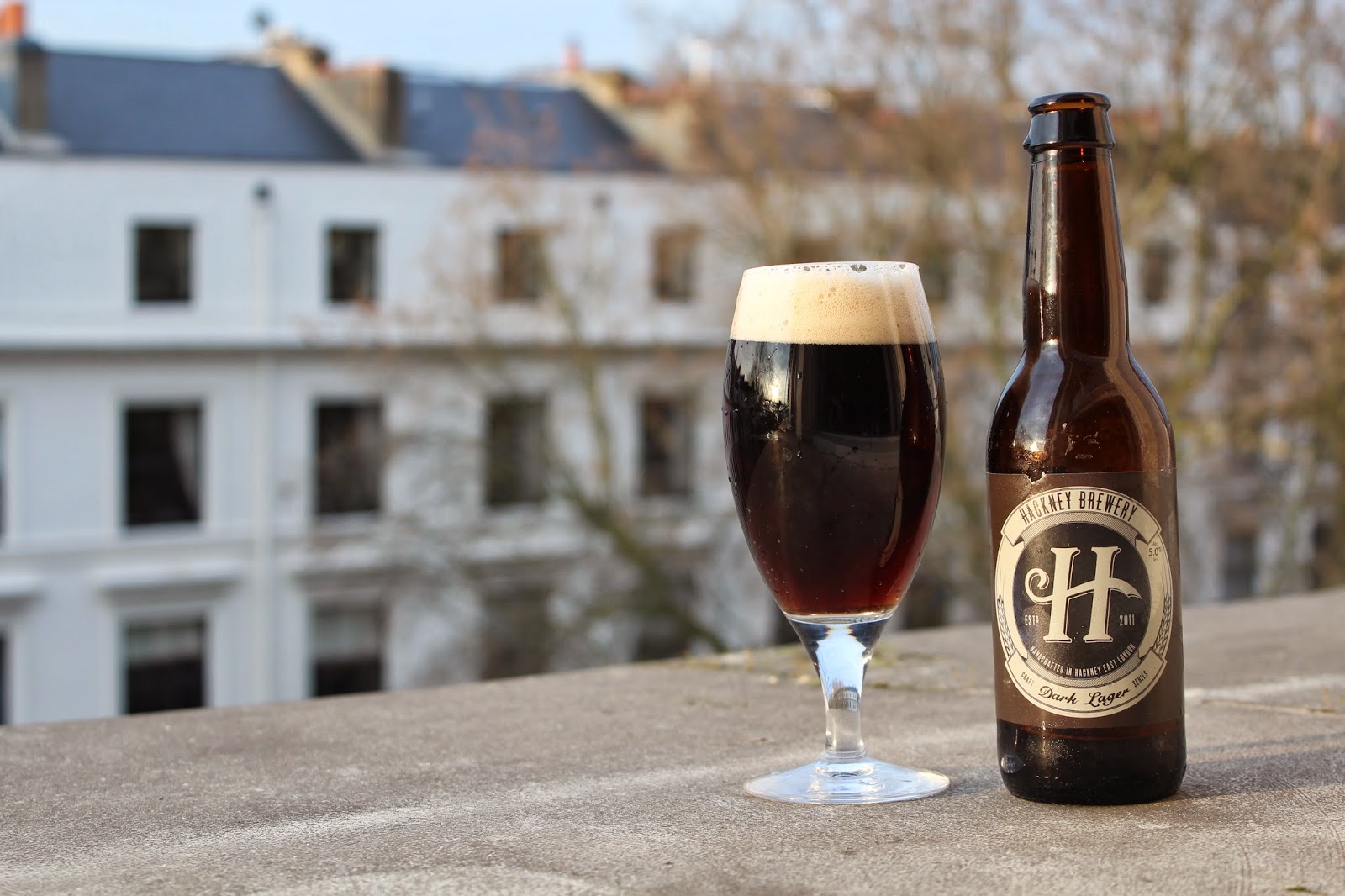 Most off-licences are pretty boring when it comes to beer. But Broadway Wines, right on Broadway Market in Hackney, offers a decent range of beers, highlighted by some local breweries such as London Fields and Hackney Brewery. My most recent visit to this offy yielded a new Hackney Brewery beer: Dark Lager. (I also snagged a killer Cypriot pale lager. How could I not?) Hackney Brewery seems to have a somewhat limited distribution of its bottled beers but it's nice that one can get them locally.

So, dark lager. Off-hand I can't think of too many other examples of this style getting made in London. Camden has definitely done one but, aside from that, dark lager (or amber lager, or vienna...) is mostly unmined territory. And fair enough as it's not an especially sexy type of beer. It's not as crisp as a straight pilsner and it's not as hearty as a stout. I enjoy a nice dark lager probably more than the next guy but I've never found myself desperate to drink one.

This dark lager from Hackney carries on the style's tradition by being perfectly drinkable though not terribly exciting. It pours clear brown with a frothy, quickly fading beige head. There are lightly toasted dark malts in the nose with subtle dry chocolate and scorched earth. Light to medium sweet, the flavor holds smokey dark malts, a bit of burnt earth bitterness and well-toasted wholegrain bread. Medium bodied with fine to average carbonation, it's fairly low-impact stuff. Reasonably well balanced to finish with moderate roasted malts, more sugary and charred toast, earth, ash, faint burnt leaves, rocks and just whispers of burnt toffee. It is an interesting beer, pretty well balanced overall and easy to drink. It was fun to try. 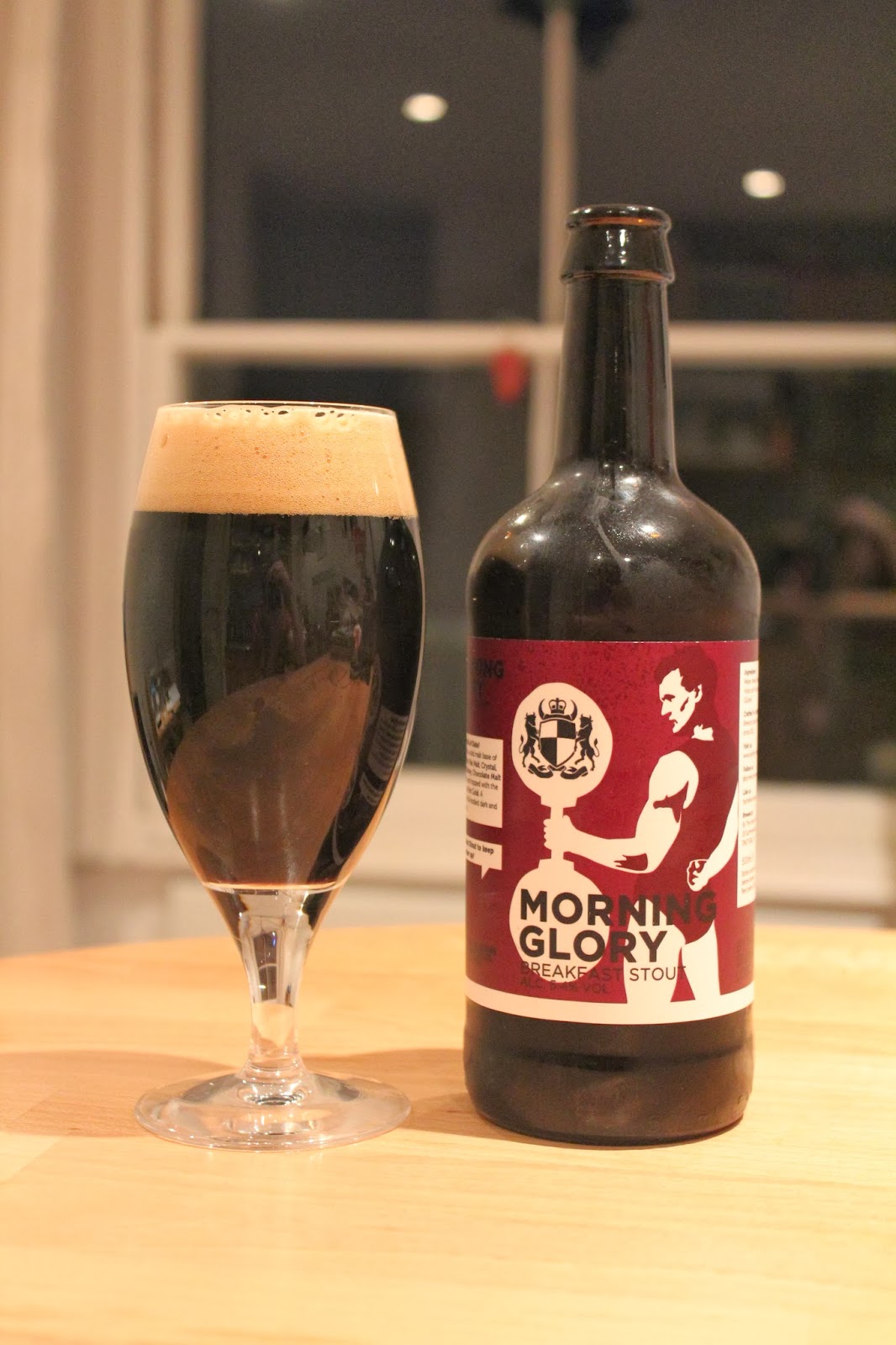 I recently tried a bottle of the By The Horns Breakfast Stout, which I picked up from the brewery. It's a good all-around beer and certainly ticks all the boxes you would expect of a stout. It doesn't have a ton of depth but at 5.4% ABV I'd say the focus here is more on drinkability than life-changing complexity.

The beer pours rich, black-brown with a thick, creamy mocha cap. There are lots of well-roasted malts in the nose, some char, hints of blackberries. The flavor is lght to medium sweet with strong roasted malt character, some scorched earth, tangy berries, baking cocoa. Medium bodied with fine carbonation and creamy mouthfeel. Fairly dynamic on the finish, further dark, tangy berries, sturdy roasted malts, dirt and bittersweet baking cocoa. Good one. (Score: 3.6/5.0)
Posted by Unknown at 03:49 No comments:

We learned a few things from the Sierra Nevada event last night at the Craft Beer Co. Islington, such as:

1. Londoners get pretty excited over Sierra Nevada. Just look at how many people showed up. To be fair, Sierra Nevada is a fantastic brewery, and the brother (Steve Grossman) of the founder (Ken Grossman) was at the event last night. Steve only spoke for a few minutes but I guess he was around to speak to the punters one-on-one if anybody wanted. Given the crowds I couldn't be bothered to make my way through the chaos to reach him. In case anyone's wondering, Steve is standing by the beer fridges in the photo below (i.e. the second quadrant).

2. The Craft Beer Co. Islington lacks adequate ventilation. I suppose enough rabid drinkers will steam up any pub; suffice it to say, there were enough drinkers present last night.

3. Sierra Nevada doesn't always hit the mark. I tried their Two Headed Ruthless Rye last night and, to be frank, I was not a fan. That said, three of my drinking companions also got halves of this rye double IPA and one of them quite enjoyed it, while the other two thought it was just OK. Perhaps my days of loving any 10%+ ABV double IPA are simply behind me. But I just found the Two Headed a bit too aggressive in terms of both the alcohol presence (it's 10.4%) and the bitterness, which consisted primarily of extremely abrasive pine.

4. Tom Cadden: legend. (But I guess we already knew that.)

5. The Sierra Nevada 30th Anniversary Fritz & Ken's Ale is drinking rather nicely at the moment. This imperial stout came out almost exactly four years ago when Sierra Nevada was celebrating its 30th anniversary. To commemorate the occasion, they brewed a series of beers featuring guest brewers, including American beer luminaries such as Charlie Papazian, Fred Eckhart, Jack McAuliffe and, in the case of the beer at hand, Fritz Maytag. At four years old, this beer is certainly showing some signs of its age (namely, moderate oxidation), but there are definitely some interesting elements. I got lots of dark, dried and leathery fruits, bittersweet baking cocoa, sturdy roasted malts and overarching burnt wood. If you happen to have a bottle I would recommend opening it sooner rather than later. Many thanks to Paul for sharing.

All in all I had fun last night. It was certainly a shame that the original shipment of beers for the event froze in transit (and were thus not drinkable) but the replacement line-up definitely kept people happy - I gather that by the end of the night only the Sierra Nevada Pale Ale was left standing.

Until next time.
Posted by Unknown at 06:21 No comments:

The Week in Beer

There's a lot of beer stuff happening in the coming week. Without a bit of planning, you might not be able to make it through. Here's a little road map to help.

Wednesday 5 March: Brodies Tap Takeover at The Rake. The event is scheduled to kick off at 5pm and the available beers will include:

Friday 7 March: Mikkeller Tap Takeover at the Kings Arms. Bring your drinking boots if you want to tackle this list:

Saturday 8 March: Siren First Anniversary Party at the Craft Beer Co. - Clerkenwell. There will be a great range of beers including several of the classics plus a couple debuts:

Monday 10 March: An Evening with Sierra Nevada at the Craft Beer Co. - Islington. SN ambassador Steve Grossman (brother of brewery founder Ken Grossman) will be on hand, as will some 12 offerings from the brewery.