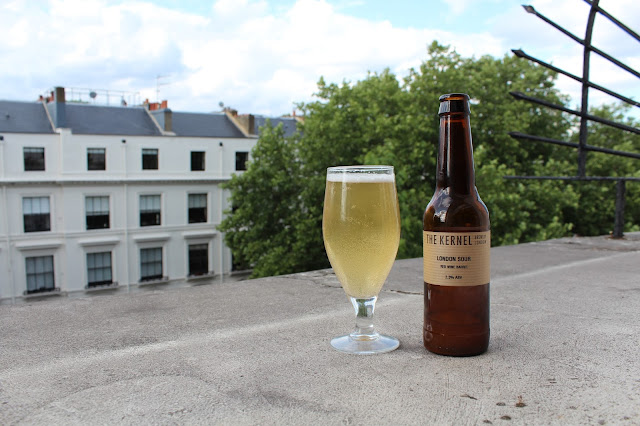 My visit to The Kernel this weekend yielded a slew of barrel-aged beers. In the last year The Kernel have embarked on a fairly ambitious barrel aging program, and they have released several of their barrel-aged beers in the last couple of weeks. Some of the beers that are either available now or will be in the near future are the Imperial Brown Stout (one in Glen Garioch, one in Glen Spey), the Stout (in Glen Garioch) and the London Sour (one in Burgundy Chardonnay, one in Burgundy Pinot Noir).

Today I'm trying The Kernel's London Sour Red Wine Barrel, a 2.3% Berliner Weisse that has been aged for four months in Burgundy Pinot Noir barrels. The beer pours clear, pale yellow with a small, quickly fading white foam head. The aroma sends off lots of tangy, acidic lemon, mellow funk, hints of ripening stone fruits. The flavor holds moderate sweetness with further lemon, some lip-puckering vinegar notes, nice acidity and hints of tart berries. It's light bodied with fine, spritzy carbonation. The finish is sour and quick. You get a bit of tart lemon bite, very little bitterness, touches of white grape and sweat. There’s mild throat burn, courtesy of that aforementioned vinegar character. In the aftertaste you get notes of soured wheat. Overall I like this a bit more than the standard London Sour from The Kernel. This barrel-aged version definitely has some additional acidic twang to it, and also a more complex fruitiness. It is quite a lovely little beer and a testament to what can be achieved at a very low alcohol level. (Score: 4.2/5.0)
Posted by Unknown at 10:16