This evening I ventured further into the Signature Brew roster of beers. I'd had a few others from this outfit before (Professor Green's Remedy, Sssnakepit and Unplugged, to be specific) and enjoyed them, so nerves were not an issue. On the docket tonight were Ed Harcourt's Dark Heart (a ramped up brown ale) and Doctor's Orders (a fairly straight-ahead lager).

Signature Brew bring something unique to the table. The three guys behind the company - David and Sam, who come from the music industry, and Tom, who has a brewing background - pair up with their favorite musical acts or record labels to create collaboration beers, which they in turn aim to sell at music venues where these acts perform; the beers are also sold to pubs and bottle shops. The collaborative process begins by meeting with the musician in question and sampling through a range of beers to assess his or her tastes. The team document these tastings and post the resulting videos on the Signature Brew website. (These videos are actually quite enjoyable to watch and I would recommend in particular the one with Ed Harcourt.) Once Tom has enough information to go on, he puts together a recipe. Signature Brew then contracts the recipe out to a brewery to have the beer produced. 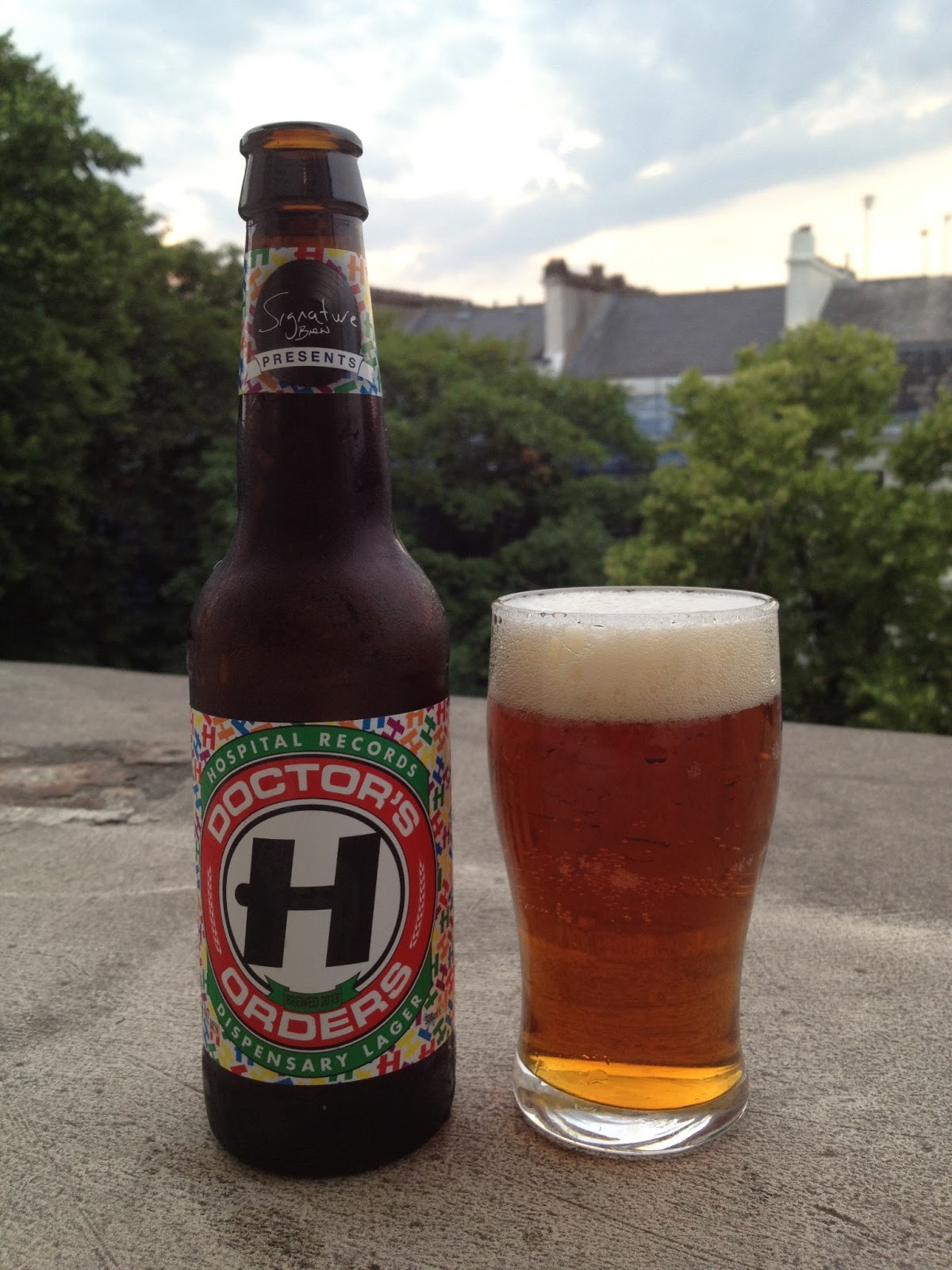 So the Doctor's Orders was a collaboration with Hospital Records, the South London-based label that specializes in electronic music. The result of their collaboration was a malty lager, clocking in at 5.2% ABV. The beer pours clear, deep gold with a moderate, frothy white head. The aroma has lots of bready malts, some cereal, hints of ripe orange. The flavor is medium sweet with lots of lightly toasted bready malts, some caramel, mild bitter cereal grains, touches of orange. Light to medium bodied with fine, creamy carbonation. Sweet finish, more sugary bread, light bitter toasted hay. It's decent. Certainly not the most complex beer you'll come across, but it's easygoing stuff. 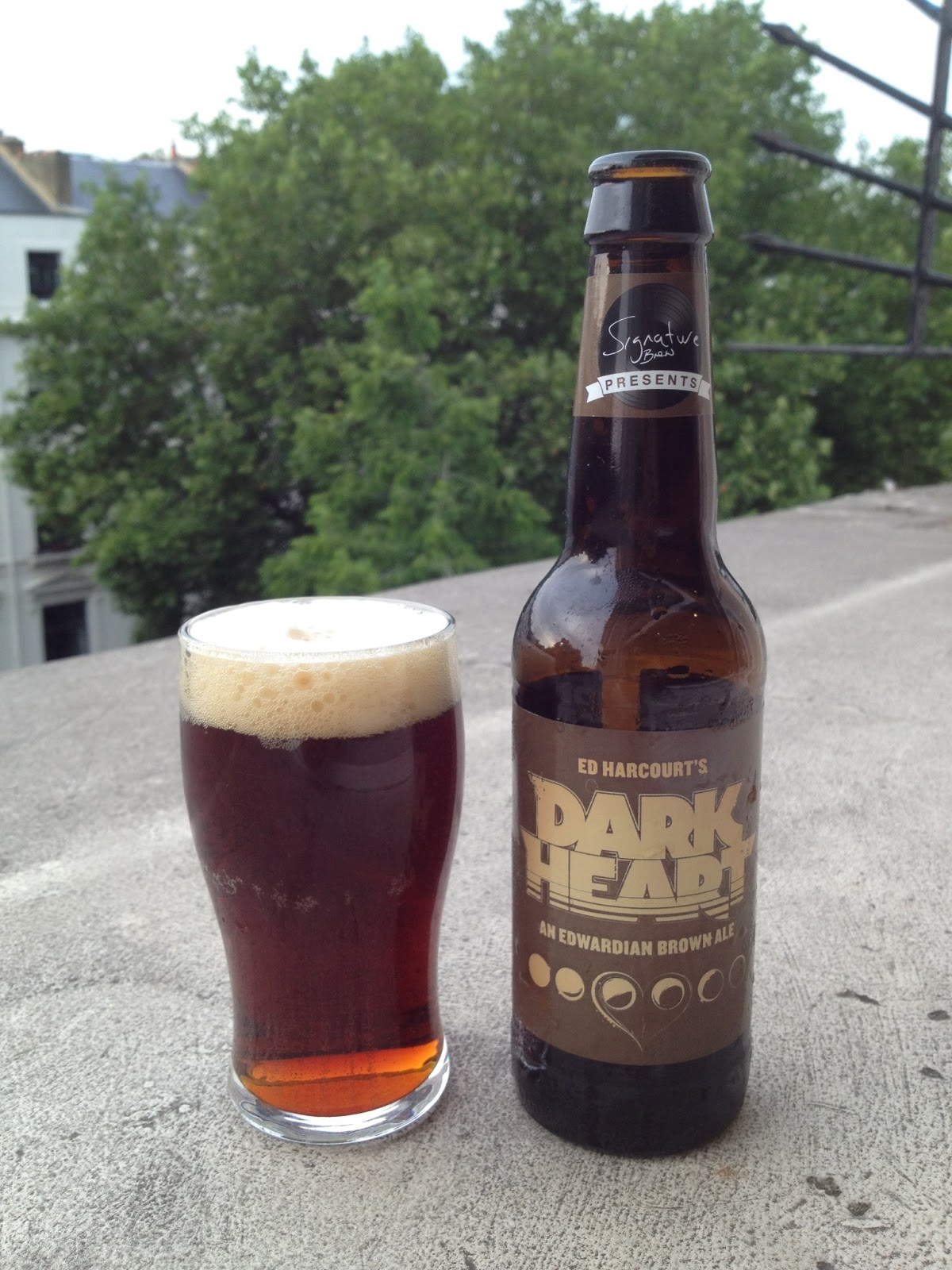 Taking it up a notch, I moved on to the 6.8% brown ale, Ed Harcourt's Dark Heart. Mr. Harcourt seemed to quite relish the opportunity to create a beer (see the video here), and his enthusiasm definitely comes through in the finished product. This so-called 'Edwardian Brown Ale' pours clear, red-brown with a strong, lasting beige froth head. The aroma holds a bit of chalky cocoa, well toasted malts, some dry earth. The flavor is light to medium sweet with lots of bittersweet cocoa, some almost-burnt brown bread, licks of robust coffee, earthy bitterness. Medium bodied with average, creamy carbonation. The texture is fairly oily. It finishes with lots more bittersweet cocoa, further earthy bitterness, burnt toast, dirt and charred malts. A pretty sturdy brown ale, and a solid effort overall. Apparently Ed Harcourt likes his beer to have some teeth.

I've enjoyed the beers I've had from the Signature Brew project so far. And I'm especially intrigued by the collaborative process they undertake. I'll be interested to see what other styles of beer come out of this fairly singular approach to brewing.