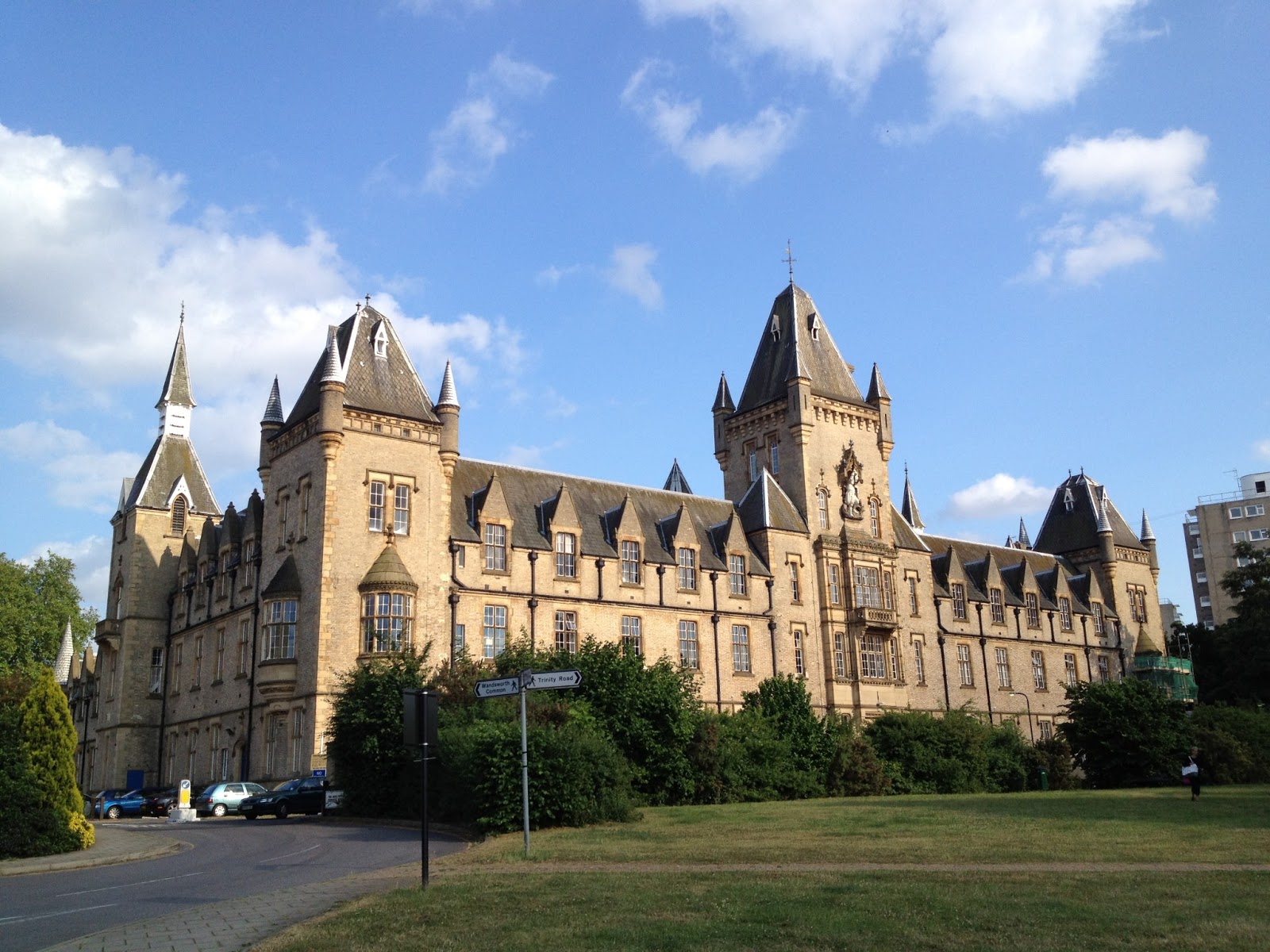 The Wandsworth Common Beer Festival is one of my favorite festivals in London. For setting, beer selection and overall experience there are few festivals that can really touch it. As such, when they announced they would put on a new iteration of their festival focusing solely on London breweries, it excited me greatly. Additionally, the prospect of a summer festival (the Wandsworth Common Festivals had until now taken place in March and October) was also a major perk.

The Royal Victoria Patriotic Building (pictured at right) houses the beer festival, and the festival takes place in the building's courtyard and attached restaurant, Le Gothique. It is quite a fetching structure aesthetically, and its history makes it all the more intriguing. According to the its website, the building began its life as an orphanage in 1857. It was subsequently a hospital during WWI, home to MI6 during WWII, and later on a school. When the building fell into disrepair, the London County Council eventually sold the building on to an entrepreneur, who funded extensive reservations to the Grade II listed structure. That was in 1980. The building now has residential flats, artist studios and workshops, office units, a bar and restaurant. And it is in that bar and restaurant section of the building that I spent last Thursday evening. The selection of beers from London brewers was indeed dizzying. There were about 40 distinct London breweries represented, ranging from the classic (Fuller's) to the more progressive brewers that have opened in the last few years (The Kernel, Partizan, Weird Beard, et al), and the styles of beer available for consumption ranged widely. The gravity casks outside poured all manner of bitters and golden ales, APAs and IPAs, stouts and strong bitters. A select few kegs lines added to the variety. In doors, a further range of handpumps offered drinkers different cask options, and there was also an excellent selection of bottled beers for sale. On the Preview Night, the session I visited the festival, the bottles were not part of the tasting schedule, so I was precluded from drinking those beers offered in bottle at the festival, such as the aforementioned Kernel and Partizan, in addition to Brew By Numbers, Little Brew, Ellenberg's, Redchurch, Beavertown, Howling Hops and Pressure Drop. During the subsequent festival sessions, which were pay-as-you-go versus the all-in price of the Preview Night, the bottles could be purchased by attendees.

Even without the bottled beers there was more than enough draught beer to keep any drinker occupied. Despite applying myself fairly vigorously for several hours, I reckon there were a few dozen beers I did not get to try. The quality level of the beers I did have was overall quite high. And the festival did well to get breweries from a broad geographic sample: from the north, London Brewing Co.; from the east and southeast, A Head in a Hat, Beavertown, Crate, East London Brewery, Five Points Brewing Co., Hackney Brewery, Brupond; and from the west and southwest, Belleville, By the Horns, Clarence & Fredericks, Cronx, Fuller's; and all these breweries are just a portion of what you would have found during the festival.

Among the most notable beers were the following: 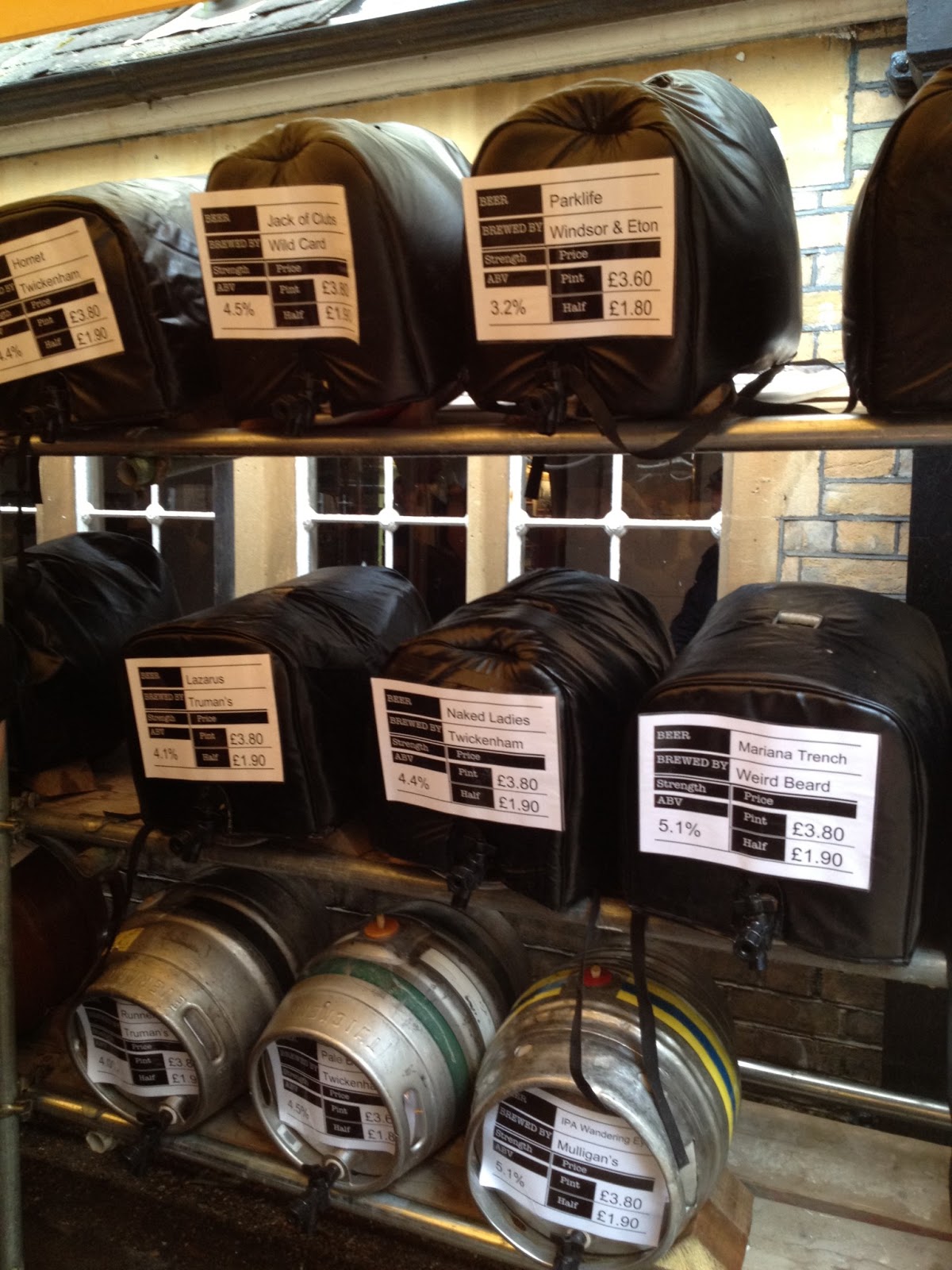 Fuller's Special 7-Year Old Matured Cask Bitter, 8.5% - it's not often you come across aged beers at festivals so it was certainly a fun experience to try this one. The beer definitely showed signs of its age, its character rife with tangy and leathery fruits, molasses, raisins, earth. I've had a number of aged beers from Fuller's before, mostly bottle conditioned beers from their Vintage Ale collection; it was nice to try one from the cask.

Rocky Head Zen, 4.8% - this was likely the most refreshing beer of the day. Pouring from a key keg, it was chilled a bit more than the gravity casks. The beer was tastefully hopped and had traces of dried lemon, tangerine and hay, with an adequate dry pale malt base to provide just enough sweetness. The beer finished lightly resinous with a nice, cleansing mineral quality. It was a really lovely little pale ale, and easily the most drinkable of the festival.

London Brewers Alliance Collaboration Ale, 7.2% - this was an interesting one. The beer was an IPA base with roasted malts, oats and wheat, and a yeast designed for wheat beers. The recipe resulted in a genre-bending so-called 'black and white IPA'. The beer showcased the creativity of the members of the London Brewers Alliance, or LBA, and the range of flavors that can be packed into one beer. Past collaborations from the LBA, which have included an IPA and a strong stout, have been fairly straight-ahead takes on those two styles, so it was great to see the brewers have a bit of fun this time around. The beer had the look of a dark beer (brown in color with creamy beige head) and some nice roasted malt character, baking cocoa and charcoal notes throughout. It also had the earthy and piney bitterness you might expect from an IPA. And it also had definite traces of banana and wheat bread that you would expect from a hefeweizen. It was a novel experiment in style-mixing and I enjoyed the resulting beer. 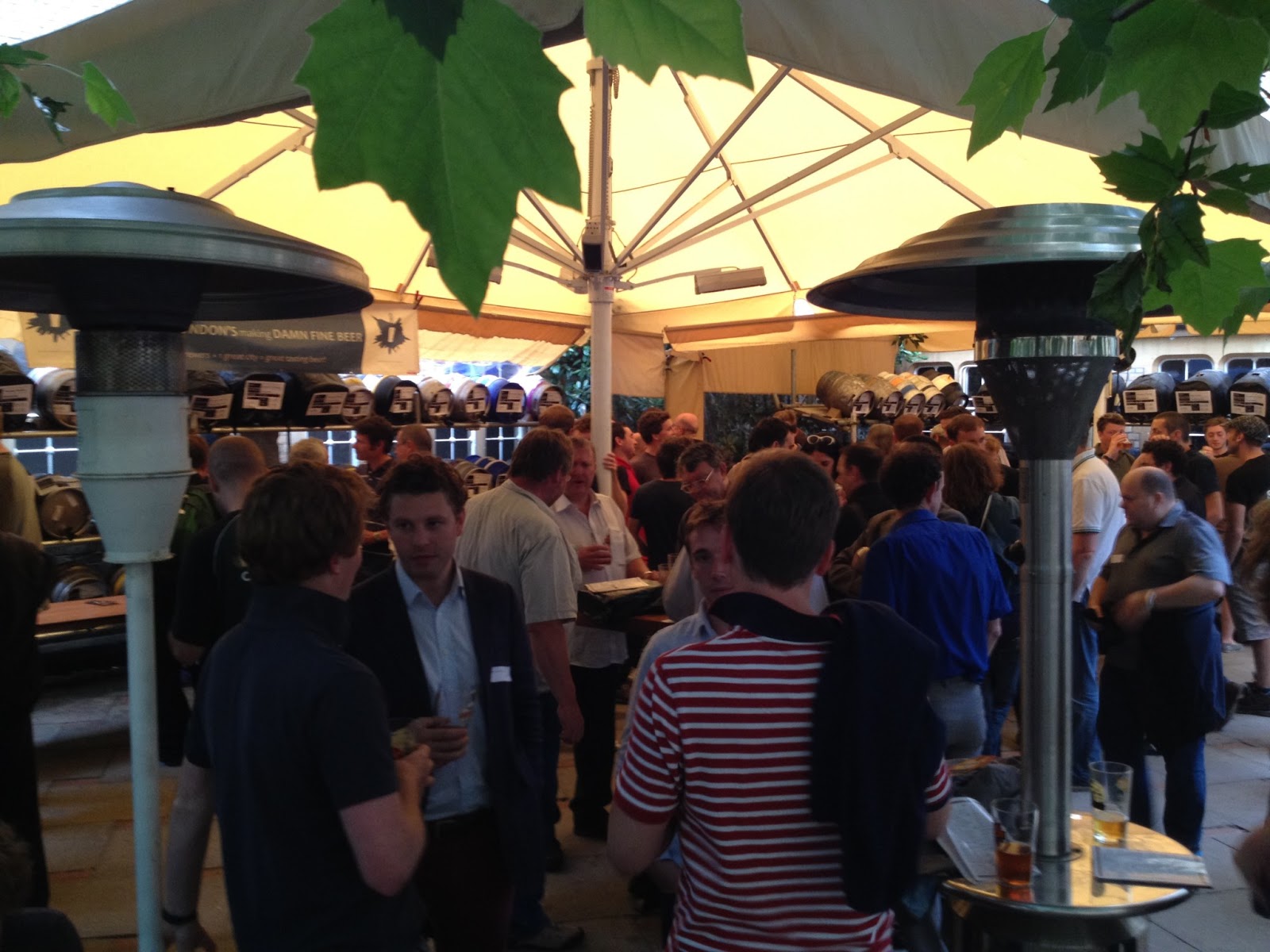 London Fields Love Not War, 4.2% - it's impressive for a bitter to be a standout at a beer festival. When you've got high strength IPAs, stouts, old ales, etc., it can be difficult for a lower ABV bitter or golden ale to match the flavor and complexity of these higher ABV styles. But with its juicy hop character and tasteful malt structure, that's exactly what Love Not War achieved. The beer contained engaging notes of ripe citrus, orange, toasty bread and some earthy pine bitterness - and all these elements were well balanced. Along with the Rocky Head Zen, this was one beer of which I could have drank a whole lot more. 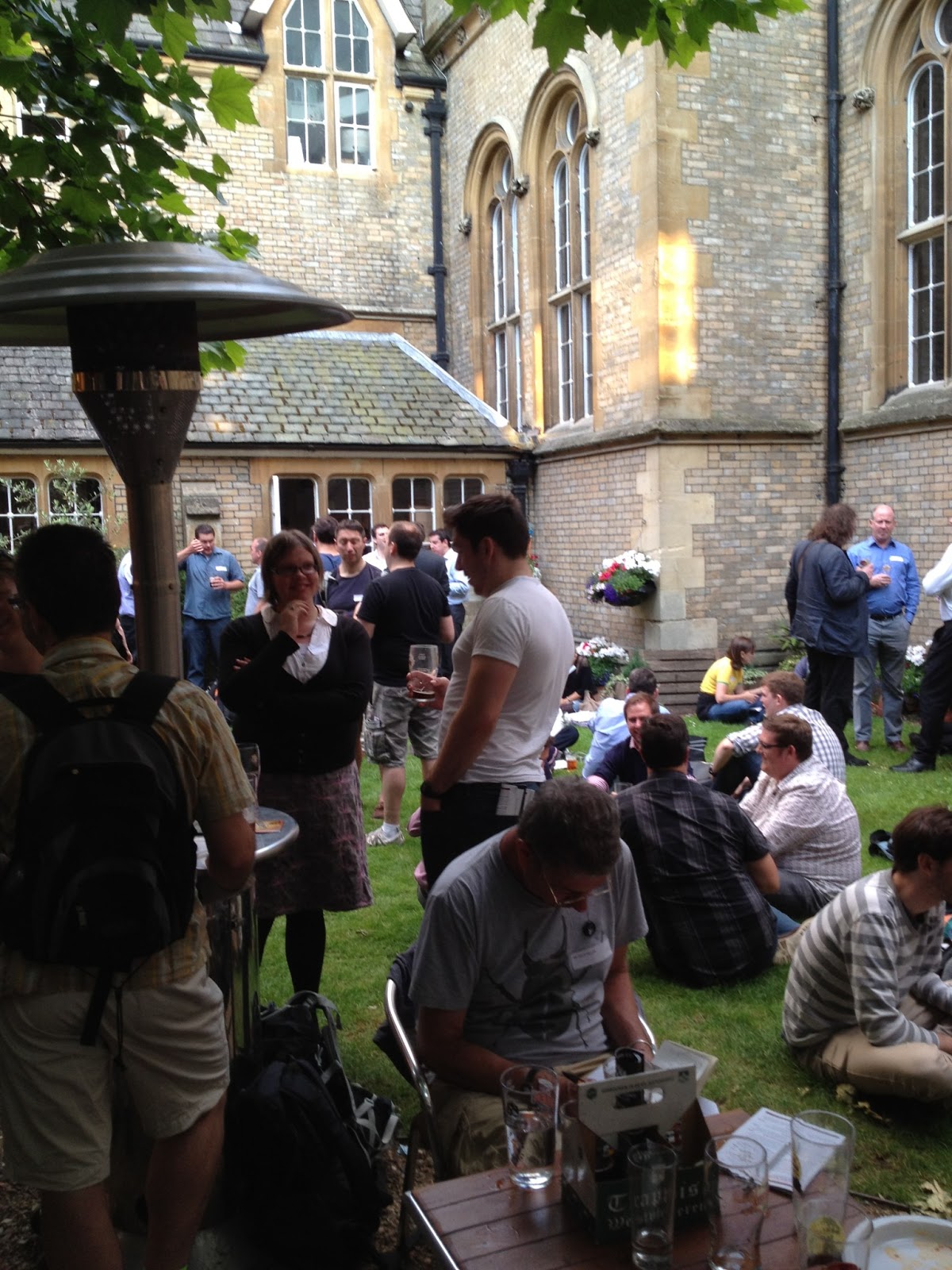 Weird Beard Little Things That Kill, 3.8% - winner of the Look-What-We-Can-Do-With-Only-3.8% category, this beer punches well above its weight in terms of its dynamic flavors and hop profile. This little ABV killer has loads of hops packed into it, resulting in a mélange of mango, grapefruit, urine (in a good way!) and lemon. And there's just enough sweet and lightly doughy white bread to hold the whole thing together. I feel like I could sink a few pints of this beer (which I didn't do during the festival - too many other beers, you know?) so I will keep an eye out for it around London.

Aside from all the great beers, though, it really is the atmosphere of this festival that makes it so special. I was lucky enough to have a seat at one of the few small tables in the courtyard thanks to my early-arriving cohort; but I'm sure the groups of friends who took their places on the grassy patches outside Le Gothique did so happily. The weather, thankfully, was beautiful during my visit, so the tent and space heaters (which you may note in the pictures on the right) were of little use. The bar staff was prompt and friendly (not always guaranteed at festivals!) and helped to make my experience a real pleasure. So well done, festival organizers, for putting together another wonderful festival, and especially well done on bringing together so many London breweries all in one place. This was easily the most comprehensive collection of beers from London-based brewers that I have come across, and it was with great enjoyment that my friends and I worked our way through the catalogue of beers on offer.